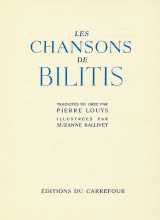 In addition to the illustrations that were included in the published book, there exist a further thirteen watercolours by Suzanne Ballivet which were almost certainly intended for Bilitis but were not included; these are now in the Kinsey Collection and are shown here after the sixteen published plates. Given that they are generally more explicit than the ones in the book, it is probable that they were her first submission for the commission, but she was asked to replace most of them with slightly less suggestive alternatives.

The Ballivet-illustrated Bilitis was published by Éditions du Carrefoure in a limited numbered edition of 1,225 copies.