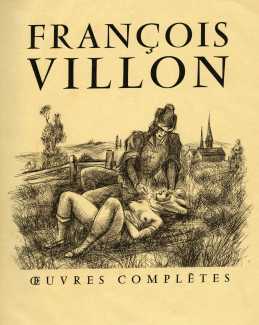 François Villon (1431–63) is the best-known French poet of the late middle ages. A ne’er-do-well who was involved in criminal behaviour and had multiple encounters with law enforcement authorities, Villon wrote about these experiences in his poems.

Villon was a great poetic innovator; he understood perfectly the medieval courtly ideal, but often chose to write against the grain, reversing the values and celebrating low-lifes destined for the gallows, falling happily into parody or lewd jokes, constantly innovating in his diction and vocabulary; a few poems make extensive use of Parisian thieves’ slang. Villon’s verse is mostly about his own life, a record of poverty, trouble, and trial which was shared by his intended audience. His poems are sprinkled with mysteries and hidden jokes, peppered with the slang of the time and the underworld subculture in which Villon moved.

If you would like to read François Villon’s poems in English translation, the best of many versions is David Georgi’s 2013 Poems of François Villon from Northwestern University Press, which includes Villon’s original French printed opposite the English. Notes in the back provide a wealth of information about Villon, the poems, and medieval Paris.

The Collot-illustrated Villon was published by Éditions Variété in a limited numbered and boxed edition of 1,500 copies.