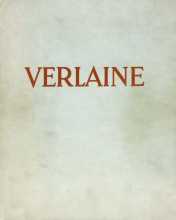 The Saint-André-illustrated Verlaine was published in a limited numbered edition of 250 copies, the coloured prints presented in an accompanying folder.