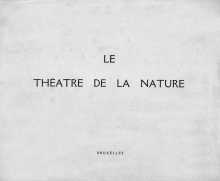 Le théâtre de la nature (The Theatre of Nature) is the best-known of the Santippa portfolios, though given that the lithographs are unsigned it is possible that these are not even by ‘the artist known as Santippa’ even though they have always been so attributed. The album consists of twenty hand-coloured prints, including a wonderfully-drawn elephant, also known in a brightly-coloured version. 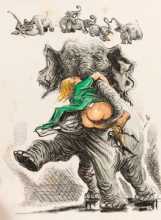 Whoever produced these fantasy-erotic scenes, they draw on the full range of sexual proclivities with few holds barred. The drawing is confident and the understated colouring adds to the overall quality of this imaginative portfolio.

Le théâtre de la nature was printed in ‘Bruxelles’ in a limited edition of 200 copies.