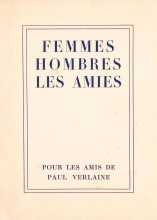 Femmes/Hombres/Les amies was published in a limited numbered edition of 400 copies, of which 200 were illustrated.