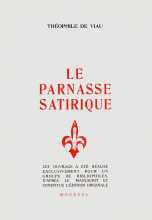 The very first stanza of this famous French seventeenth-century collection of ribaldry sets the tone for all the rest:

Everything goes into everything, everything fucks,
Everything in this book is fucked by everything else,
Gentle reader, do not doubt it;
The odes fuck the sonnets,
The lines fuck the verses,
Even the letters themselves fuck each other!

Le parnasse satirique (The Satyric Parnassus) is a collection of licentious texts published in Paris in 1622 bringing together the work of many different libertine and satirical poets. Its publication triggered a scandal and a war of libels unprecedented until then in French literary history, and resulted in the severe condemnation of Théophile de Viau, its compiler and author of some of the contents. After its first publication and a reprint the following year (by which time Viau was serving a short prison sentence for blasphemy), Le parnasse satirique was suppressed until the 1860s, but even then it was banned again ‘for insulting public morality and religion as well as good morals’.

A standard uniform edition did not appear until 2002, but this short selection of poems, along with a set of accomplished illustrations by an unknown artist, was published anonymously in 1950.

This edition was published in a numbered run of 500 copies ‘Pour un groupe de bibliophiles’.