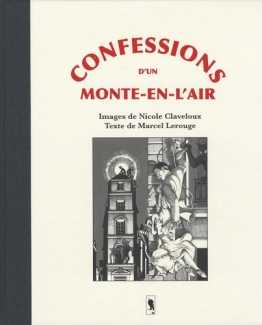 ‘One evening, in her boudoir, one of these beautiful, daring girls held my cheek for endless minutes. The girl then continued to have fun at my expense, even while waiting for the police to arrive.’ These first-person confessions of a self-professed and mostly successful gentleman-burglar, working the houses and streets of the French capital at the turn of the nineteenth century, are by turns dark, atmospheric, sensuous and witty. The nocturnal exploits of a ‘monte-en-l’air’ (climb-in-the-air) are just as much occasions for sexual intercourse as for larceny. Is his real strength stealing people’s prized possessions, or as a thief of hearts, a seductive acrobat that no woman can resist?

Nicole Claveloux carefully studied the architecture, costume and domestic detail of the time for her detailed illustrations. The care given to the decorations, fabrics and objects is clear in every image. Couples hug in the midst of horned gargoyles, love each other atop cathedrals, and dive between the arches of bridges adorned with erect statues.