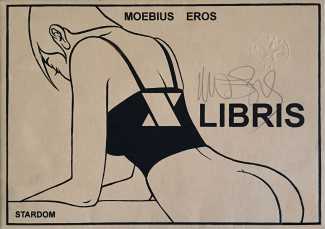 As well as working with major comic publishers, Giraud was keen to preserve the artistic and production qualities of his best work, so in 1984 he established an independent publishing house, Éditions Aedena, with colleagues and fellow artists Jean Annestay and Gérard Bouysse. Under the Aedena and Starwatcher Graphics imprints, several limited editions of his more experimental work appeared, including La nuit de l’étoile (Night of Stars), Venise céleste (Celestial Venice), and Voyage intemporel (Timeless Journey).

Giraud had been experimenting with bookplates for some time, and in 1997 Aedena, under a Moebius Eros/Stardom imprint, produced a small portfolio titled X Libris of eight bold colour plates, each with a typically enigmatic title. Though each of the images is thought-provoking and tells its own story, they show Giraud in what is probably his most conventionally sexual mode.

X Libris was produced as a signed and numbered limited edition of 500, presented in an brown card envelope.