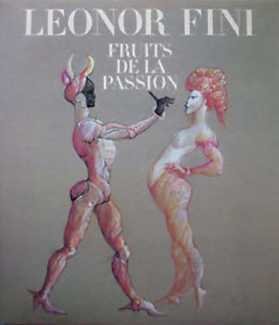 Fruits de la passion (The Fruits of Passion) was the last major portfolio of Leonor Fini’s work to be published in book form. The thirty-two large format plates are much more detailed than her earlier drawings, using crayon, pastel and gouache on coloured papers to create highly stylised and choreographed interactions. As Peter Webb writes in Sphinx, ‘The drawings in this album display an assured elegance in their examinations of sexual behaviour, even when the images are at their most violent.’

As with Fêtes secrètes, Fruits de la passion includes an extended introduction by Jean Claude Dedieu, less verbose and more considered four years after his first attempt. He makes some useful points, writing for example that ‘in spite of the polymorphy there is no contradiction, but rather combination, an analogical approximation: a human being is like an animal; a garment is like a flower, the clasp of the shoe is like a gemstone. The same membranous matter constitutes the architecture of both the organs and the garments. The body is no longer merely naked or clothed. The same lines indicate blood vessels and veins, edges of muscle and the folds of clothes.’

In the end, though, the subject and meaning of each plate is an interpretation and significance unique to Leonor Fini as artist and the viewer as a unique individual. The images are powerful, sensual, often troubling, but always strangely beautiful.