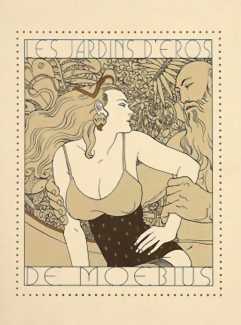 Though each image is quintessentially Moebius, there is no unifying narrative; it would appear that these are drawings produced over a period of time for which a portfolio like this was the ideal medium.

Les jardins d’Eros was produced in a signed and numbered limited edition of 400.