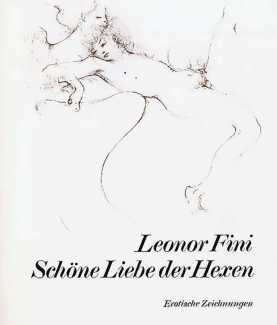 Of all Leonor Fini’s German admirers, none was more active on her behalf than Karl Heinz Kramberg, editor of the Munich-based newspaper Süddeutsche Zeitung and expert on the works of the Marquis de Sade, on which he had written widely. In 1969 he produced a best-selling anthology entitled 34-mal verbotene Liebe (34 Instances of Forbidden Love), bringing together sex scenes from classics of world literature.

It is hard to believe that Leonor would have approved of either the title or the effusive verbiage of Kramberg’s lengthy introduction. She did not consider herself a witch in any sense, and would have laughed at paragraphs such as ‘One does not have to be an expert in the obscure sciences to read the text of a puzzle from the pictures of Leonor Fini, whose meanings are as light and as heavy as the concept of the viewer. All the games and positions of love depicted on these pages signal the pathos of fiery devotion and inspiring humiliation. Surely it is the beautiful love of witches.’

For posterity’s sake, however, bringing together more than eighty of Leonor Fini’s sensual drawings made the project well worthwhile. It would have been more useful if the volume had included a list of the drawings with their dates and contexts, but what is offered here is uniquely valuable.

Schöne Liebe der Hexen was published as a hardback book in a red slipcase by Kurt Desch, and is one of the more affordable of Leonor Fini’s portfolios.