Balkangreuel (Balkan Atrocities) is a large boxed portfolio of twelve detailed engravings by Sieben, self-published under his Archibald Smith pseudonym; whether or not this was clear to his purchasers, or if they believed that they were by an English artist, the choice of nom de plume is intriguing. The ‘Englishness’ of the production is enhanced by the short preface by ‘Herbert Stone’; is this the real-life Herbert Stone (1871–1955), the American magazine editor and publisher, or yet another pseudonym?

The graphic engravings show Turkish (and maybe also Russian) soldiers in various acts of rapine and torture, and are clearly meant to be as sensational as possible. But which historical incidents are they actually supposed to depict? By 1909 Turkish soldiers were nowhere near the Balkans, having been decisively driven back to the Bosphorus by the Russians after a series of violent rebellions against Ottoman rule in the 1870s. 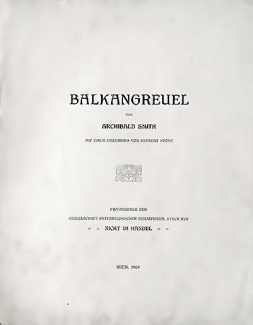 Thwarted in the Balkans, the Ottoman Empire turned its attentions eastwards, expanding Turkish influence into Georgia and Armenia. In April 1909 violence peaked with a massacre in the Adana Vilayet of the Ottoman Empire, part of a series of anti-Armenian pogroms throughout the province. It is estimated that the Adana massacres resulted in the deaths of 20–30,000 Armenians.

It would seem that Sieben chose late 1909 as the perfect time to capitalise on anti-Ottoman sentiment in Austro-Hungary, reminding his clientele that what was being reported from Armenia was very similar to the stories he had heard during his travels in the Balkans. How better than to remind them of such heartless atrocities, at the same time using the opportunity to add a fistful of gratuitous sex?

Balkangreuel was produced in a boxed, limited, numbered edition of 550 copies, under the imprint ‘Privatdruck der Gesellschaft Österreichischer Bibliophilen’ (Private Press of the Society of Austrian Bibliophiles).