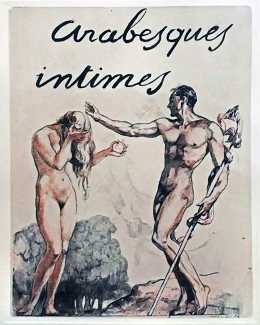 During his lifetime very few of those who appreciated Alméry Lobel-Riche’s work, even those who enjoyed his naked women, were aware that he had also produced two extremely explicit portfolios of couples having sex. Not only having sex, but vigorous, robust sex.

The first portfolio of 41 etchings, Arabesques intimes (Intimate Arabesques), appeared in 1937, followed a year later by Nouveaux méandres intimes (New Intimate Twists), a collection of twenty-five heliogravures, a photo-mechanical technique Lobel-Riche was experimenting with. Both were published privately in very small editions, and were probably entirely pre-subscribed and quickly disappeared into the libraries of select gentlemen. This explains why neither portfolio is in any public or academic library, and why on the very rare occasions that one appears at auction the interest – and price – is high. The last copy of Arabesques intimes to appear at auction, in 2017, sold for more than 2,000 Euros. This, and the fact that many copies have been broken up or disposed of by embarrassed families on the death of the ‘gentleman’, also explains why it has proved impossible to include here an entirely complete set. With the help of the indefatigable Hans-Jürgen Döpp we have managed to include all of Arabesques intimes and twelve of the Nouveaux méandres intimes plates; if you can help us complete both portfolios we would love to hear from you.

Lobel-Riche’s characteristic lyricism runs through all these plates, a sinuous line, sometimes enhanced in pencil, emphasising the plasticity of the bodies and positions. Many of the plates bear witness to his skill in anatomical drawing, a line and shading worthy of Goya. The plates also show him experimenting with a wide range of techniques, particularly the use of deep red, or sanguine, as a second colour to add depth and power to the image. The Nouveaux méandres intimes plates are even more experimental, sometimes using different shades of sanguine and printing on coloured paper. This stylistic and inspirational variety is no doubt explained by the fact that, by the author’s admission in his preface, all of the images gathered in this collection ‘were created, widely spaced, during the course of a lifetime, plate by plate, capturing an fleeting impression or a well-drawn memory’.

It is fascinating to wonder why Alméry Lobel-Riche chose this particular juncture, shortly after his divorce and remarriage, and on the eve of the Second World War, to collect his most intimate images into these two portfolios. An in-depth study of the man and his work is long overdue. 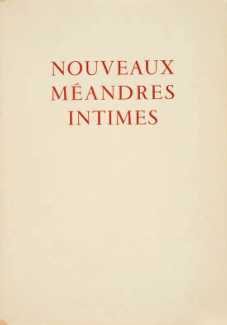