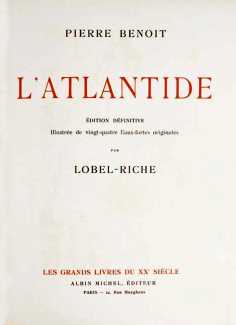 It is 1896 in the French Algerian Sahara. Two officers, André de Saint-Avit and Jean Morhange, investigate the disappearance of their fellow officers. While doing so, they are drugged and kidnapped by a Tarqui warrior, procurer for the all-powerful Queen Antinea. Antinea, descendant of the rulers of Atlantis, has a cave wall with a hundred and twenty niches carved into it, one for each of her lovers. Only fifty-three have so far been filled; when all are accounted for Antinea will sit atop a throne in the centre of the cave and rest forever. Saint-Avit is unable to resist Antinea’s charms, and following her instructions murders the asexual Morhange. Ultimately Saint-Avit is able to escape from Antinea’s desert stronghold and lives to tell his tale.

L’Atlantide is a fantasy novel by the French writer Pierre Benoit (1886–1962), first published in February 1919. It was translated into English in 1920 as Atlantida. L’Atlantide was Benoit’s second novel, and won the Grand Prize of the French Academy. It was immensely successful, and four years after it was first published the mainstream Paris publisher Albin Michel commissioned Lobel-Riche to illustrate the story, the first novel he had worked on. He clearly relished the commission, and his portrayals of the stately Queen Antinea used his skills to the full.

The Lobel-Riche illustrated L’Atlantide was published in a limited numbered edition of 582 copies.