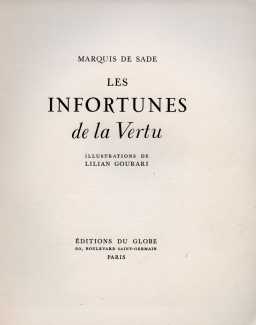 Les infortunes de la vertu (The Misfortunes of Virtue), better known as Justine after its main character, was written by the Marquis de Sade in two weeks in 1787 while imprisoned in the Bastille. Set just before the French Revolution, it tells the story of a young girl who calls herself Thérèse. Her story is recounted to Madame de Lorsagne while defending herself for her crimes en route to punishment and death, explaining the series of misfortunes that led to her present situation. Thérèse’s ‘misfortunes’ are very much what has resulted in Sade’s name being given to sexual violence and torture – she seeks refuge in a monastery, but is forced to become a sex slave to the monks who subject her to countless orgies and rapes; she helps a gentleman who has been robbed but takes her back to his chateau with promises of a post caring for his wife, where Thérèse is confined in a cave and subjected to a range of sexual punishment.

The irony of Justine is that while her sister Juliette had found herself a comfortable existence where she could exercise good, Justine refused to make such concessions and as a result of wanting to help others was plunged further and further into the world of criminality. The story ends with Juliette forgiving Justine, but Justine becomes introverted and morose. While closing a window in her sister’s house she is struck by a bolt of lightning and killed instantly; as a penance Juliette joins a religious order.

Lilian Gourari’s twenty-one photoengraved illustrations mirror the innocent faith of Thérèse/Justine in their rather naive yet sufficiently accomplished style. Justine herself is simple and unsophisticated, the monks are grotesquely monkish, and the rogues clearly unscrupulous reprobates. The ornamented capital letters at each chapter opener – ‘lettrines’ in French – add character to the well-designed pages.

Les infortunes de la vertu was published by Éditions du Globe in a boxed and numbered edition of 300 copies.