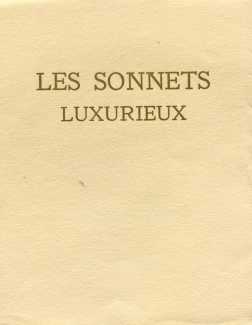 Les sonnets luxurieux (‘luxurieux’ translates as lascivious, lewd or lustful) are also known as I Modi, or The Positions, since each of the sixteen poems describes in graphic detail the ways in which sexual congress can be achieved. Their author, Pietro Aretino (1492–1556), was a satirical Italian poet and writer who had the favour of Pope Clement VII, the former Giulio de Medici, as Aretino had lent his pen to the Medici cause. The first edition of I Modi, published in 1524, included a set of engravings by the artist Marcantonio Raimondi, which were considered so explicit that the Vatican banned them, but Aretino believed that his standing with the new Pope would allow the illustrated sonnets to be made freely available, so a new edition, with the engravings, appeared in 1527.

If Arentino and Raimondi believed they could trade on Arentino’s favour with the Pope to avoid censure, they were mistaken. Arentino’s sonnets were not just explicit; poet and engraver had used them to depict the men in I Modi not as classical figures, which they may have got away with, but as contemporary prominent men of power. When the Pope’s henchman Giovanmatteo Giberti opened the book to find that Arentino had turned him into a porn star, he ordered Arentino’s arrest. Arentino fled to Venice, a city more conducive to his pen; Raimondi escaped a second spell in prison only to be financially ruined. As for I Modi, the Vatican gathered up all available copies and burnt them. Although attempts were made years later to recreate the book using Raimondi’s original plates, the Vatican had left no copy in existence, unless some papal official had saved a copy for the Vatican library where the pictures and the sonnets could be enjoyed safely in private; if so such a copy has never been found. You can read the whole story here.

In the twentieth century several illustrators produced a set of sixteen new plates to accompany the Aretino sonnets, most famously Édouard-Henri Avril, but also Tavy Notton, and André Collot in this set of typically ribald Collot images. Collot’s loose and sparingly-coloured illustrations perfectly capture the free spirit, playfulness and enjoyment of Aretino’s verses.

The Collot-illustrated Les sonnets luxurieux was published with no indication of a publisher, in a limited numbered edition of 150 copies.