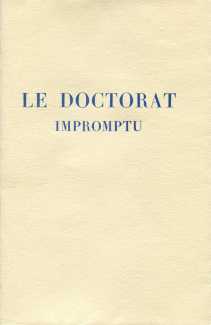 André-Robert Andréa de Nerciat, best known for his novel Le diable au corps (The Devil Incarnate) and the erotic memoir Les Aphrodites, was the son of a Burgundian royal official, who retired from the military in 1775 to concentrate on writing plays, verse, light music and pornographic novels. He worked as a secret agent of the French government across Europe, and may also have worked as a double agent, as he was arrested by the French when they invaded Naples in 1798. Le doctorat impromptu (The Impromptu Doctorate) is an epistolary novel published in 1788, consisting of fictional letters between the convent-fleeing nun Erosie and her confidante Juliet as Erosie explores a variety of new-found pleasures of the flesh.

During the late 1930s the Parisian publishing house La Tradition was producing a large number of illustrated classics, commissioning Berthomme Saint-André, Bécat, Lambert, Dulac and Mercier in an all-out effort to attract book-collectors. The monochrome Collot illustrations to Doctorat impromptu are workmanlike, but compared with his most imaginative work a little pedestrian.

The Collot-illustrated Doctorat impromptu was published by La Tradition in a limited numbered edition of 500 copies.