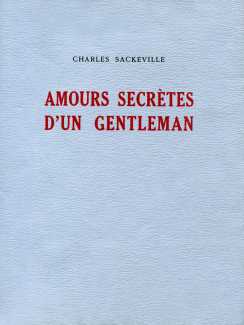 Edward Sellon (1818–66), the real-life author of Amours secrètes, was quite a character. The son of a brewer in Brighton on England’s south coast, he joined the army at sixteen and served in India for ten years, eventually being promoted to captain. In 1844 he married Sarah Wilds, but finding that she was not as rich as he had been led to believe before the marriage, left her to live in London with his mother. After two years Sarah rejoined him, but by now Sellon was keeping a mistress in another part of London, and had seduced his fourteen-year-old parlour maid Emma. As a result Sarah left him, Sellon seemingly unrepentant. Hard times followed after the family fortune was lost, and Sellon worked as a stagecoach driver on the Cambridge Mail for two years, then as a fencing master. After numerous affairs he was reconciled with his wife and went to live with her in a village in the New Forest for three years, but after she had a child he grew tired of her and returned to London to resume a life of debauchery. A reconciliation with his wife was engineered by a rich relation, but this ended when his wife discovered him leading a group of schoolgirls into a local wood ‘for a game of hide and seek’.

Towards the end of his life Sellon made an income from writing erotica for the pornographic publisher William Dugdale, including The New Epicurean (1865) and a memoir entitled The Ups and Downs of Life (1867) which featured his erotic escapades in India. His best-known work, which interestingly was more popular in French translation than the original, is The Secret Loves of a Gentleman, probably because it was mostly bought clandestinely in Paris by English ‘gentlemen’ with more imagination than opportunity. The pseudonym ‘Charles Sackville’, the family name of the Earls of Dorset, was presumably chosen to add ‘Englishness’ to the text as Sellon sounded a little too French.

Saint-André was in his element illustrating Amours secrètes for the prolific publisher Maurice Duflou, and as well as the ten very explicit full-page illustrations for the book produced a set of smaller chapter-openers which demonstrate his considerable figure-drawing skill in simple line drawings.