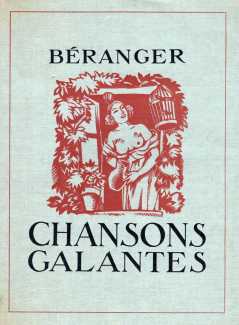 ‘I am quite a good poet,’ Pierre-Jean de Béranger said of himself, ‘clever in the craft, and a conscientious worker to whom old airs and a modest choice of subjects have brought some success.’ His modest self-appraisal belies his importance in literary history. Larry Portis in his history of popular French music, French Frenzies: A Social History of Pop Music in France, describes Béranger as ‘the most popular French songwriter of all time’. When Pierre-Jean de Béranger first began to cultivate the chanson, it was a minor and little-regarded form, restricted to slight subjects and a humorous guise of treatment. He raised the standing of the art, imbued it with sentiment, and turned the French song into into an internationally-recognised art form.

The Collot-illustrated Chansons galantes was printed in a limited numbered edition of 1,500 copies.