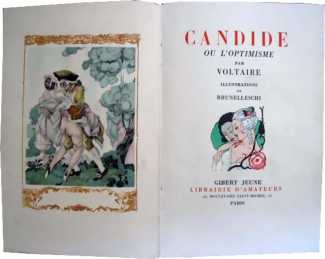 The Paris bookseller Gibert Jeune was established in 1886, and in the 1930s Regis Gibert, the younger son of its founder, took the business solidly into publishing. One of his first commissions was to ask Umberto Brunelleschi to produce a series of illustrations for Voltaire’s famous satire Candide. Umberto rose to the occasion, producing sixteen plates in a style intermediate between art deco and his later romantic style. Sadly the Gibert Jeune edition was printed on poorer quality paper and at a smaller page size than many of Brunelleschi’s earlier illustrations, and suffer as a result, but they still display his sureness of line and light touch. The format was popular, and the book was reprinted several times, the last being in 1952.