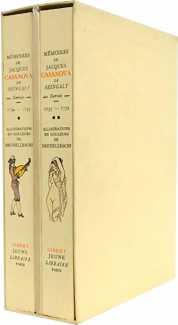 The Brunelleschi-illustrated edition of Paris-based publisher Gibert Jeune’s Mémoires de Jacques Casanova de Seingalt did not appear until the year after the illustrator’s death. As with the Decameron and La Fontaine, Umberto Brunelleschi’s later nostalgic style suited the market perfectly, and the thirty-two colour illustrations are expertly executed. 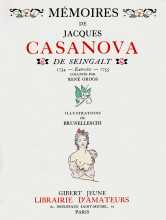 The two-volume Casanova worked well for the publisher; the limited edition sold out quickly and it was reprinted in 1955; by this time, however, taste had changed, and Brunelleschi’s reputation was on the wane.

The Gibert Jeune, Librairie d’Amateurs edition of Casanova was produced in a limited numbered edition of 3,000 copies, as a two-volume boxed set.