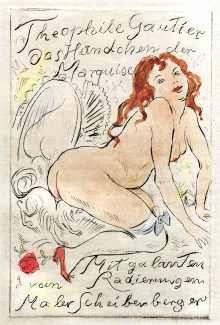 Das Hündchen der Marquise (The Marchioness’s Lap-dog, or in the original French Le petit chien de la marquise) is a short story by Théophile Gautier, first published in the December 1836 issue of Le Figaro. It is a very slight rococo romance, in which the Duke Alcindor has to compete with the eponymous lap-dog for the favours of the Countess Éliante.