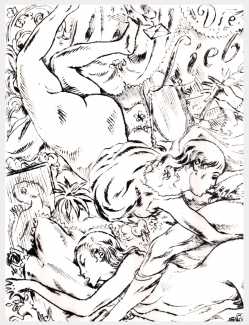 Die Liebesspiele der Venus (The Love Games of Venus) came hot on the heels of Kindergarten, and was the first of three portfolios in which Schoff gave his imagination free rein to explore the world of orgies and group sex. Having successfully reached his fortieth birthday, and being fortunate enough to be based in Weimar Berlin, there was no lack of stimulation. Visiting Berlin in 1927, the American Netley Lucas was shocked by the city’s decadence – ‘Now we come to the most lurid underworld of all cities,’ he wrote in Ladies of the Underworld. ‘Ever since the declaration of peace, Berlin found its outlet in the wildest dissipation imaginable. The German is gross in his immorality, devoid of any refinement; he enjoys obscenity in a form that even the Parisian would not tolerate.’

Decadence and dissipation there was in the Berlin of the 1920s, and there was also desperate hardship – October 1923 saw the worst depths of ‘the great inflation’, when the value of the postwar German Mark plummeted and money became virtually worthless. But for many there was also a joyous freedom and creativity, where you could experiment with your identity, gender and relationships.