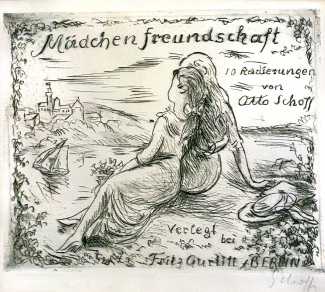 On the lesbian front, in addition to the Sappho portfolio in the same year, 1920, Schoff also created a portfolio called Mädchenfreundschaft (Girls’ Friendship), a tender portrayal of the enduring love of two girls of about ten, who share open air activities, kisses and cuddles. There is nothing explicitly sexual in this set of ten beautifully-observed engravings, but there is clearly mutual closeness and warmth.

In 1924 Schoff produced another female-only portfolio, Freundinnen (Women Friends), this time portraying the two women in their late teens or early twenties. Again there is nothing explicitly sexual, but they are clearly enjoying each other’s company. About this time he produced a number of watercolours on the same theme, using skilled yet simple line and colour to describe the deepening connection between women, which may or may not become physically intimate.

And then there was intimacy between men, a subject which was clearly on Schoff’s mind; whether he was interested in a purely artistic capacity or was tempted to see what it was like in practice we shall probably never know. Homoeroticism, however, was very much part of the Berlin scene in the mid-1920s, both in its gentler, open-air-freedom variety, and in its darker underworld manifestations. The face of the latter is captured well by the Austrian writer Stefan Zweig in his 1942 memoir Die Welt von Gestern (The World of Yesterday): ‘Along the entire Kurfürstendamm powdered and rouged young men sauntered, and they were not all professionals. Every high school boy wanted to earn some money, and in the dimly-lit bars one might see government officials and men of the world of finance tenderly courting sailors without any shame.’ 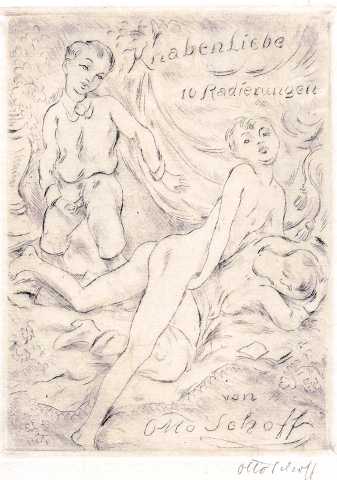 Otto Schoff’s 1925 portfolio Knabenliebe (Boys’ Love), another unattributed Gurlitt collaboration, is very much at the ‘innocent’ end of the homoerotic spectrum. The participants nearly all appear to be in their early teens, doing what boys in their early teens do, checking their own and each other’s appendages. The cutest is probably the image of the pierrot and the ballet dancer fondling each other’s diminutive penises.