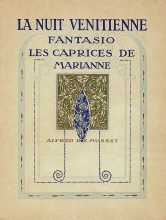 Given the style and subject matter of both author and artist, it is unsurprising that almost the first and almost the last texts to be illustrated by Brunelleschi were the works of the master of French eighteenth century romance, Alfred de Musset. 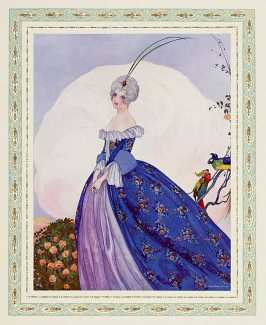 It was in 1913 that the prestigious Paris publishing house of L’Edition d’Art H. Piazza commissioned twenty colour plates from Brunelleschi for a sumptuous limited edition of three of Musset’s best-known novellas, La nuit Venetienne, Fantasio, and Les caprices de Marianne. He rose to the occasion with a set of colourful, stylish interpretations, and the 500 copies sold out within weeks of publication. 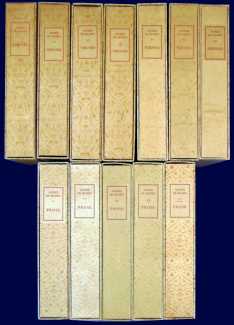 It was something of a lifesaver for Brunelleschi, whose work had fallen out of fashion, and who needed both the work and the income. It took him more than a year to produce the artwork, and though some of it is a little stilted and formulaic he still knew how to draw a firm round breast and a shapely thigh. Within a year of finishing the work he was dead, thus Musset being both his introduction to book illustration and his swansong.

The postwar reproduction of the illustrations, printed in four-colour lithography plus solid white ink for some plates on rather low-grade yellowish paper, does not do justice to Brunelleschi’s artwork. We have done our best to show them as they would have appeared on better paper and with the worst of the blemishes removed.

The Brunelleschi-illustrated Oeuvres complètes de Musset was produced in a boxed set of twelve volumes, in a limited numbered edition of 1,200 copies.