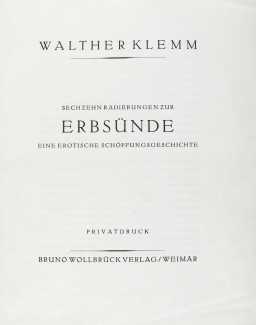 God created land and water, plants and animals, and then rested for a day. He longed to crown his creation with a being of the most perfect beauty, so he created woman. Tired from the creation of this most wonderful work, when he had breathed life into the woman he fell asleep.
But the devil was lying in wait and crept in, full of curiosity. Eve’s divine beauty kindled his greed, and lasciviously he touched the woman’s glorious limbs. In doing so he discovered the pink appendage that God had hidden between his thighs.
In lustful play, his devilish hands kindled insatiable embers of hellish fire in the woman’s loins. He trickled fragrant herbal juice into the cleft and under the woman’s tongue, anointed the rosy tips of her breasts and the hollows under the armpits with magic scent, and let fine hair overgrow them. He wanted to hide the firebrand between his thighs from God’s sight, so he let a triangular black fur grow over it. Eve came to life and felt the burning of the devil’s wound.
Then she saw a young zebra stallion standing nearby, and feeling her own wetness hurried to take hold of its phallus and put out the fire with its coolness. The more often she dipped him into her wound, the more comfortable she became. Her awakened senses drove her with unrestrained madness to couple with all the male creatures of Paradise.
Then God was frightened, and realised that Eve, like all other creatures, needed a companion. So God created Adam. He gave him the strength of the bull and the ferocity of the stallion, and between his legs he made the most splendid phallus grow, so that he might still the woman’s lust.

Klemm was fortunate that he knew Bruno Wollbrück, the enterprising son of the Berlin bookseller Auguste Wollbrück, who after the war set up a publishing company in Weimar specialising in art prints. Bruno Wollbrück Verlag had already commissioned the artists Max Thalmann and Heinrich Linzen, so when Klemm suggested that Bruno publish Erbsünde the young publisher readily agreed. The 360 elegantly-presented copies sold quickly, but the anticipated positive critical response never materialised. It had been expected that the newly-established Weimar Reichskunstwart (State Art Agency) under the liberal directorship of Edwin Redslob would be positively inclined towards progressive art, and the influential artist Max Liebermann stated publicly that Erbsünde was in no way obscene, but during a period in which many utopian dreams were dimmed by social and political forces, more conservative voices prevailed, and there were threats of legal action and the blacklisting of both Klemm and Wollbrück.