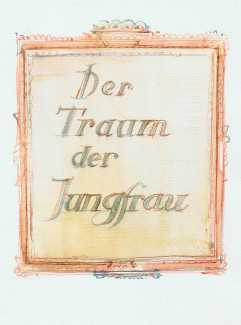 Der Traum der Jungfrau (The Virgin’s Dream) is one of the few complete themed portfolios created by Otto Schatz, or at least ones that have survived. Significantly, it dates from the period not long after the National Socialist government had first imposed an exhibition ban, and then a personal professional ban, on Schatz.

The ‘virgin’s dream’ so explicitly illustrated in this series of watercolours reflects Schatz’s fantasy of such a dream, the illustrations depicting young girls surrounded and beset by larger-than-life phalluses, as well as being penetrated by monstrous snakes and octopuses.