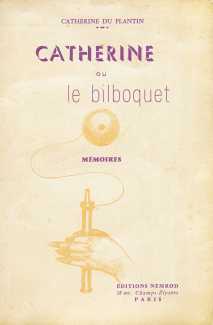 To understand the title of this period memoir you need to know that a bilboquet is a traditional French children’s toy consisting of a wooden cup with a handle, and a ball attached to the cup by a string. The ball has two holes on opposite sides, and the trick is to throw the ball up and have it land in the cup, with one of the holes neatly pierced by the small spike in the middle of the cup. The sexual implications of the game are obvious, especially if accompanied by a spirited faux memoir by a schoolgirl finding her way in the world.

Both author (‘Catherine du Plantin’) and publisher (Éditions Nemrod) are unknown beyond this single volume, as is the ubiquitous ‘Anon’ who created the twelve passably accomplished line drawings and three chapter ends. The text is also better than many of the period, a first-person romp through a wide range of sexual encounters.

Catherine ou le bilboquet was produced in a limited numbered edition of 1,000 copies.