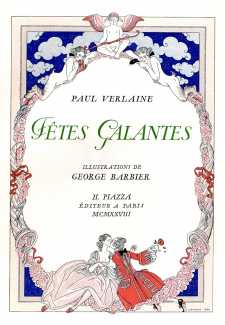 Published in 1869, Fêtes galantes was Paul Verlaine’s second volume, his first being the Poèmes saturniens of 1866. The twenty-two poems depict scenes of seduction and love banter between characters from the world of the Italian commedia dell’arte, set in an arcadian countryside. It was a perennial bestseller, and an obvious choice for a Barbier commission.

The Barbier-illustrated Fêtes galantes was published by H. Piazza of Paris in a slipcased numbered limited edition of 1,200 copies.