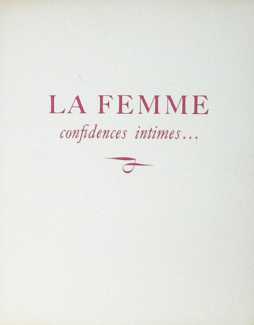 La femme: confidences intimes (Woman: Intimate Secrets) is something of a blast from the past. Published eight years after Bécat’s death, with text by the strange Doctor Jacotus Brededin (he of the study of mammaries in The Life of Breasts), it feels more early 1950s than late 1960s, by which time Paris was in the grip of student revolution and sexual emancipation.

La femme: confidences intimes was produced in a limited numbered edition of 700 copies.