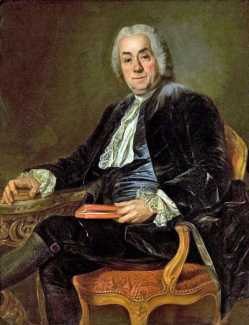 Anne Claude de Tubières-Grimoard de Pestels de Lévis, Comte de Caylus, Marquis d’Esternay, Baron de Bransac (1692–1765) was quite a character. An enormously energetic and thorough antiquarian, his passions ranged from Greek and Egyptian classics to collecting French folk tales. He also had a thorough acquaintance with the gayest and most disreputable sides of Parisian life, and left a large number of witty stories relating to it, which were collected in 1787 as his Œuvres badines complètes. His contes (stories), hovering between French fairy tales and oriental fantasies, conventional charm and moral satire, were published as Les féeries nouvelles (1741), Les contes orientaux (1743), and Cinq contes de fées (1745). 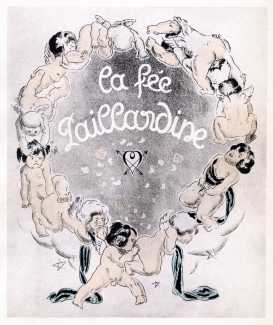 However, none of these collections included a story entitled La Fée Paillardine, ou la princess ratée (The Bawdy Fairy, or the Princess who Failed) as the attribution to this 1933 volume suggests, and the possibly fictitious back-story to the text illustrated by Collot is that the unpublished manuscript by Caylus was found among the papers of Pierre Louÿs, having been recognised and rescued by Louÿs. There is more than a suspicion that Louÿs himself wrote La Fée Paillardine in the style of Caylus, which is entirely credible.

Once upon a time there was a fairy named Paillardine. She was shapely, tall and firm; her hair was brown and her complexion was a little dark; in short, she was truly delicious. Her skin was as soft as it was smooth. The movement of her bottom was perfect. Nature rarely offers such happy talents and true gifts! And added to all her other qualities, she was the most wonderful lover.
If only she had been an actual woman in the real world, being as I have described her in all truth, would she have ever lacked lovers? No, never! Yet in the fairy world, and regardless of her regular lovers, of whom she always had a dozen or so on duty, with just one wave of her wand she was fifty times more capable of satisfying all the lust she felt and inspired.
But she did not want to advertise herself. She preferred to send three or four trusted women out into the world, who would give her a faithful account of the best lovers there, their good and bad qualities. Each of these emissaries knew exactly what Paillardine liked best. Among her requirements was that any lover worth considering would possess at least ten inches when fully aroused, otherwise it would be impossible to give her sufficient pleasure. 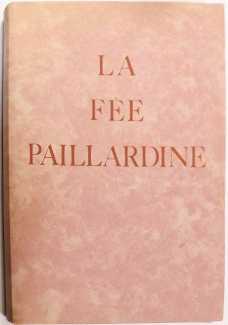 The Collot-illustrated Fée Paillardine was first published in 1931 in a limited numbered edition of 160 copies; the illustrations shown here are from the 1933 reprint (again limited and numbered) of 175 copies.