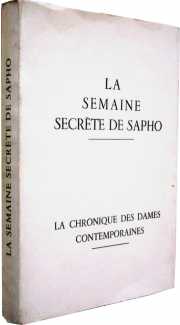 La semaine secrète de Sapho (Sapho’s Secret Week) was published by Marcel Lubineau as the sole production of the imprint La Chronique des Dames Contemporaines (The Journal of Modern Women). A rather well-written first-person account of a young woman’s introduction to lesbianism and group sex, it purported to be by a female author, but both publisher and author knew better.

In a parallel existence, during the Second World War Pia participated in the French Resistance, and in 1944 became chief editor of the clandestine resistance journal Combat, using the pseudonym Pontault. He was a great friend of Albert Camus, and Camus dedicated his 1942 essay The Myth of Sisyphus to Pia.

The quality of the writing is well matched by André Collot’s eight coloured plates, which in our copy has small remarques or supplementary drawings added at the foot of the page.

The 1929 edition of La semaine secrète de Sapho was published in a limited numbered edition of 250 copies; a reprint of 300 numbered copies appeared in 1930.