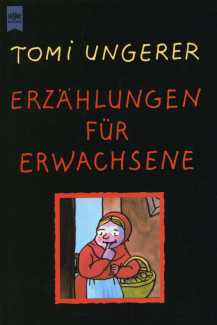 In 1975 Tomi Ungerer produced an extensive set of illustrations for Das Grosse Liederbuch, a big volume of German songs in romantic vein – it was a huge success and sold well over a million copies. As a joke – and as he explained ‘driven by my native devils’ – several years later he created a companion volume for adult readers, Erzählungen für Erwachsene (Stories for Grown-ups). It was published by Heyne, and though it did not sell anything like a million copies it was much appreciated by a select readership.

In Erzählungen für Erwachsene you will find thirty-one well-known characters from Snow White and Cinderella to Macbeth and Sherlock Holmes, all enjoying the more erotically exciting aspects of their respective stories. See how many you can identify.

At the end of the portfolio as published in the Heyne volume, we have added four of the original sketches for the book, plus a handful of related images from the 2002 Taschen volume Erotoscope.