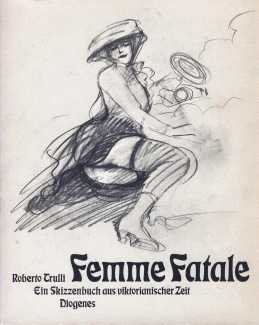 In 1984 Ungerer’s German publisher Diogenes produced a volume entitled Femme Fatale in its art history series by the hitherto unknown Italian artist Roberto Trulli. At the time very few people knew that Trulli was actually a Tomi alter ego, a showcase for a portfolio of pencil sketches he had been producing for several years previously.

As Tomi explained when the connection had been established, ‘Despite all the miseries which led to the First World War, the years around the beginning of the twentieth century are still called La Belle Epoque in France. Strongly influenced by romanticism, my mother was one of this generation. I was brought up in a world of fairy tales, German Lieder and reading poems aloud. It was an era of utmost prudishness, when women shut their eyes before opening their legs – harbouring lurking and lascivious demons below tightly laced waists, under long skirts. The results of my explorations in this genre was Femme Fatale: A Sketchbook from Victorian Times, a spoof which was published under the name of Roberto Trulli. My publisher Daniel Keel wrote a preface, describing how he came upon the sketches of this forgotten artist.’

Keel’s introduction is a model of invented biography, and well worth reading alongside Tomi’s inventive and suggestive artwork:

In 1982 the Romanian art dealer Nino Zanini organised an exhibition of drawings by his childhood friend Federico Fellini in his gallery on Rome’s Via del Babuino. As Fellini's publisher, I was involved in the exhibition and anxious to present the artworks in his home town as well as possible. Looking for old prints, I roamed the streets of Trastevere, where I discovered a sketchbook by a certain Roberto Trulli. I liked the irony in the accomplished lines of the drawings, so I bought it, both in order to own it and to make it available to a small group of friends interested in erotic art.
As the artist was unknown to me, I started doing a little research. In the library of the Galleria Nazionale d'Arte Moderna, I discovered that Trulli was a friend of the celebrated Italian painter Giovanni Boldini (1842–1931). Boldini, son of a renowned painter in Ferrara, studied at the Academy of Florence. At the invitation of the Duke of Sutherland, in 1869 he travelled to London, where he painted portraits of the aristocracy, thence to Paris in 1872, again to England in 1872, and then to America, Austria and Germany, where he painted Adolf Menzel in Berlin.
Roberto Trulli was born in Casalpusterlengo south of Milan in 1857 as the son of a watchmaker and inventor, and met Boldini in Florence. Naturally talented and self-taught, Trulli always stood a little in the shadow of his elegant and talented friend, whom he accompanied on his travels between London and Rome, Berlin and Nice. The two friends frequented the demi-monde salons, where they were introduced to Verdi, Degas and D'Annunzio. They enjoyed themselves in the cabarets and maisons closes of Montmartre, and later in the studios of the bohemian circle of Montparnasse, where they met the dreaded cartoonist Sem, the painter Helleu, the legendary model Kiki, and the art dealer Vollards.
‘One day,’ Ambroise Vollard records in his Memoirs of an Art Dealer, ‘Sem received a telephone call from his friend Boldini, who asked him to come immediately; he was not at all well. Sem answered the call immediately. Boldini had arranged a wonderfully theatrical scene to make Sem believe in his death. He had lit candles around his bed, on which he lay motionless with folded hinds; the door was left open on purpose. Sem was very moved. Believing that it was his sacred duty to record his friend's features one last time, he took his sketchbook out of his pocket and approached the bedside. At that moment Boldini threw back the covers, jumped up from the bed, and stood stark naked in front of Sem. Without batting an eyelid, Sem said to his friend “Don't move! That pose is excellent!”’
Giovanni Boldini died in Paris in 1931. Eleven years earlier, in 1920, Roberto Trulli, his friend and shadow, had preceded him to his death. Only a few pictures in northern Italian provincial museums – and now this frivolous sketchbook – remain as witness to the turbulent friendship between Trulli and the great Boldini.