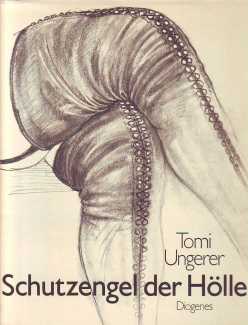 During the summer of 1985 Ungerer spent an extended period in the north German city of Hamburg, creating illustrations for a piece of sociological reportage which was later published as Schutzengel der Hölle (Guardian Angels of Hell). It is a book about a specialised form of prostitution, where people pay to have pain inflicted upon them.

As he writes of the experience, ‘I tried to find a kind of normality in these extreme situations. and hunted for the reality in absurdity. I was lucky enough to meet Domenica, an empress among prostitutes, and the madame of a highly specialised brothel. It was thanks to her that I learnt all about these women, who I came to think of as the prostitution equivalent of a Rolls Royce – women in leather whose speciality was giving satisfaction to masochists. I even had my own ‘blue’ room in the brothel, with clean sheets and a black rubber mattress. These women, I discovered, are a sort of elite, understanding, intelligent and completely free of prejudice. They never sleep with their clientele – they’re there to meet a need for abasement. They’ll nail your tongue to a block of wood or stick a needle in your testicles if that’s what you want. The question I wanted to ask in the book was, “What is normal?” Many of the clients are psychiatrists. So who’s normal? The shrink, or the loony on the couch? In these illustrations there are no faces, only masks. Clients forget their own identity, and the dominatrix becomes a completely abstract figure. After all, isn’t our own face just another mask? I never saw a real torture scene, so I stopped short of that. All I drew was the décor, the costumes and the equipment.’

These pencil sketches show Ungerer as an accomplished artistic recorder of things exactly as they are, without embellishment or commentary.