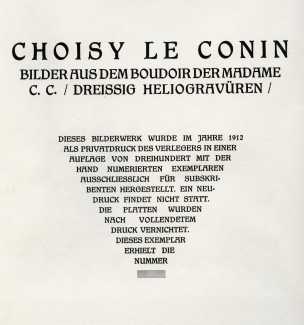 Bilder aus dem Boudoir der Madame CC (Pictures from the Boudoir of Madame CC), privately published in a limited edition of 300 copies, appears to be a fairly random collection of thirty von Bayros etchings, brought together under a suitably titillating title. It is quite likely that the ‘CC’ relates to von Bayros’s pseudonym Choisy de Conin, as though von Bayros never remarried after his short failed marriage to Alice Meyszner he clearly enjoyed the intimate company of society women. Maybe Madame CC was his perfect fantasy partner, the woman who was everything he imagined in a lover.

A few of the plates also appear in other von Bayros portfolios, including Die Töchter des chinesischen Scharfrichters (The Daughters of the Chinese Executioner) and Die fünf Sinne (The Five Senses). Many also have short pencil-written captions in French.

Despite the publisher's assurance on the title page that ‘it will not be reprinted’, the portfolio was repeatedly illegally reprinted during the 1920s. A high-quality facsimile reproduction was produced in the 1960s.