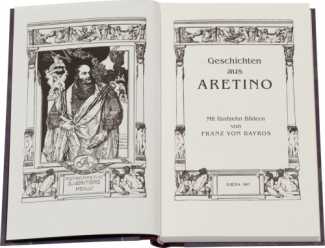 Franz von Bayros produced this set of engravings to accompany an edition of Aretino’s Ragionamenti translated into German by his friend and colleague Heinrich Conrad (1865–1919), a multi-talented man who his biographer Franz Jäschke appropriately calls Der grosse Unbekannte (The Great Unknown). Born Hugo Storm in Husum near Hamburg, Conrad’s many achievements were overshadowed by his death, and that of his publishing colleague George Müller, just as the First World War overtook Germany.

A freethinking writer and entrepreneur, he first worked as a publisher and bookseller in Berlin, where in 1894 he founded the Verlag für die Vertreter des Naturalismus (The Association for Free Literature), which published works by freethinkers including Stanisław Przybyszewski, Gustav Falke and Paul Scheerbart. Unfortunately publishing such important works did not bring financial reward, and in 1898 he filed for bankruptcy and fled to the USA.

By 1902, however, Conrad was back in Europe, spending several years in Siena before settling finally in Monte Carlo. He maintained his links with German publishers, and for more than a decade was a prolific editor and translator, working primarily with the Munich-based publisher George Müller. Probably his best-known achievement was the fifteen-volume 1907 Casanova Erinnerungen (Casanova Memoirs), unfortunately unillustrated, but in the same year von Bayros produced these fifteen etchings for a privately-printed portfolio to accompany Conrad’s Aretino translation.