Sapho is one of more than two dozen novels by the French writer Alphonse Daudet (1840–97), an author who is still read widely today. Sapho was published in 1884 (an English translation, Sappho, appeared two years later), and tells the story of young Fanny Legrand, who having posed for a statue of the famous Greek poet for the sculptor Caoudal becomes the lover of a series of men, including the engineer Déchelette, the poet La Gournerie, and the young student Jean Gaussin.

The engrossing narrative follows Fanny and Jean through a difficult series of transitions and life choices, addressing many emotional and practical issues which arise from unconventional libertarian relationship arrangements. In many ways it is well ahead of its times, which is largely why it has remained so popular. 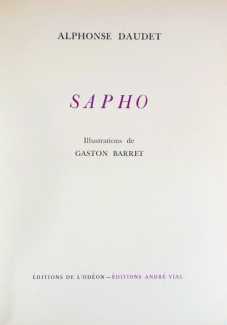 Barret’s illustrations for this 1950s Sapho, from a collected edition of Daudet published by Éditions de l’Odéon/Éditions André Vial, capture vividly the relationships so well portrayed in the novel.