Guillaume Apollinaire (1880–1918) was one of the most inventive, original and iconoclastic writers of the early twentieth century, among other achievements credited with coining the term Cubism in 1911 to describe the emerging art movement and Surrealism in 1917 to describe the musical compositions of Erik Satie. Born Wilhelm Albert Włodzimierz Apolinary Kostrowicki in Rome, he was raised speaking French, Italian and Polish, and moved to France in his late teens, where he adopted his new name.

He quickly became one of the most popular and active members of the artistic community of Paris, his friends and collaborators including Pablo Picasso, Henri Rousseau, Gertrude Stein, André Breton, Jean Cocteau, Erik Satie, Marc Chagall, Marcel Duchamp and Jean Metzinger. He was romantically involved with the writer Marie Laurencin, who is often identified as his muse. 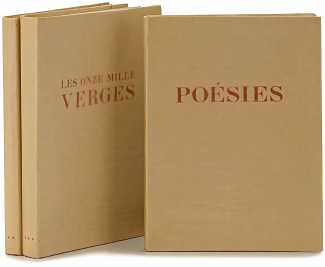 This god we adore is Lampsakos
Who must be brought out of exile
And fly to the aid of Priapus
To rescue women in tears
And chaste vestal virgins
Their cunts lit up with phosphorus.

My cock my beautiful spring
Fill me with your divine liquid
My sweet cucumber, my parsnip,
My rod, my one-eyed snake, my pin,
Come and find your way out.

Mirely, in my summer nights
I remember Léontine
With whom my enchanted cock
Sang matins

Woman, oh inexhaustible vagina
Remembering you makes me hard
Your breasts distribute manna
Your thighs, what a pleasure
Even your bloody periods
Produce a violent liqueur

The Lubineau edition of Œuvres erotiques complètes has the imprint ‘A Barcelonette’ (actually Paris of course), and was produced in a numbered edition of 200 sets.

We are very grateful to Philippe Isoard of Librairie In Quarto, Marseille, for these illustrations. The In Quarto catalogue can be found here; where you can buy the set if it is still in stock.