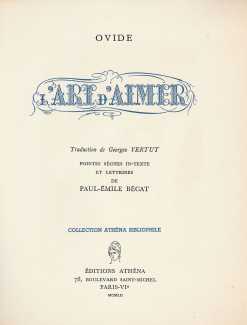 The Roman poet Ovid’s Ars Amatoria (The Art of Love or L’art d’aimer) is a classic of instruction about intimate relating, and even though written two thousand years ago (it is thought in 2CE) much of its teaching remains more or less pertinent, like not forgetting someone’s birthday and letting them miss you – but not too much.

Bécat’s relationship with Ovid started in 1942, when the publisher La Tradition produced an edition of L’art d’aimer translated by Héguin de Guerle (1793–1881), a rather stilted version which was not helped much by 24 bold colour illustrations printed on the same pages as the text. The limited edition of 650 copies sold well, however, and the following year La Tradition added a new Ovid selection entitled Les amours, translated by Latin scholar Marie-Jacques Mangeart, with another 24 Bécat colour illustrations in a similar style and layout to L’art d’aimer.

After the Second World War the Paris publisher Éditions Athéna rejuvenated both titles, with new modern translations by George Vertut and more stylish and tasteful engravings by Bécat. Les amours was reissued by Athéna three years later in the same format; you can see Bécat’s new illustrations for it here.

The 1952 Bécat-illustrated L’art d’aimer was produced in a limited and numbered boxed edition of 770 copies.