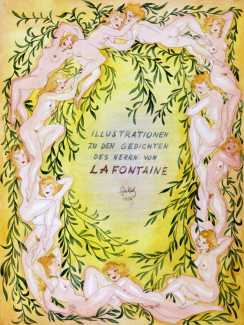 From the careful detail depicted in Szekély’s imaginative watercolour illustrations to accompany some of the best known (and bawdiest) of Jean de La Fontaine’s fables, it is clear that he was very familiar with them, and had probably been thinking about how to illustrate them for some time.

At least two sets of Szekély La Fontaine watercolours are known, the title page of one set explaining that they ‘were painted in January and February 1954 for the collection of Prof. R. de Soó’. Rezső de Soó (1903–80) was Professor of Botany at Debrecen University and Keeper of the Botanical Gardens there; a world expert on orchids and on the botany of the Carpathian region, he was a prodigious collector on many fronts – his collection of original illustrations, the second largest in Europe, was donated to the Budapest Museum of Arts and Crafts in 1969. He had Hungary’s most extensive private stamp collection, containing some 180,000 items, and his library included over 10,000 volumes. He also owned an important collection of art objects, paintings, carpets and porcelain figurines. And he bred pedigree cats. In 1960 Szekély produced a humorous illustrated travel guide to Hungary dedicated ‘to Prof. R. de Soó after 18 years of friendship’, so it had been a long collaboration between artist and collector. 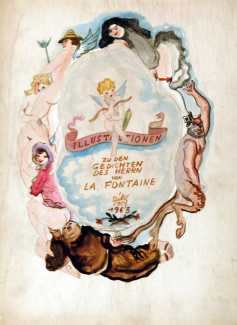 The second title page gives a date of 1963 (1954), so it may well be that Szekély added more illustrations at this later date.

The La Fontaine illustrations are some of the best of Szekély’s work from the 1950s, showing skill in both composition and colouring, as well as including vivid and often witty detail. His little red devils in ‘La Diable de Figuiéres’ and ‘La chose impossible’ are classics. Nearly all of the paintings have captions in French and German, so it is easy to tell exactly which tale each refers to.