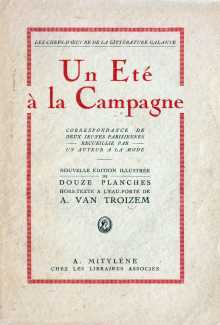 The text consists of the correspondence between Adèle and Albertine, adolescent school friends who are looking forward to the summer holidays in the French countryside with their respective families. They are also thinking rather a lot about sex. The book is written as a series of forty-one letters, describing in detail how their experiences of intimacy develop over the long hot months.

No publisher’s name is given for this edition, supposedly published ‘in Mityléne’ (Mytilene, the capital of the Greek island of Lesbos), though almost certainly by Georges Briffaut in Paris, who used ‘Mityléne’ in other editions. For this set of plates van Maële uses his pseudonym A. van Troizem.