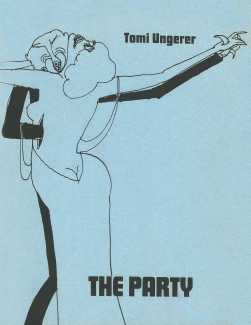 By 1966 Tomi Ungerer had been living in New York for nearly a decade, finding artistic and commercial success but at the same time becoming increasingly cynical about the social expectations that came with that success. For some time he had been drawing the high society ‘types’ he met at parties where he was expected to know how to socialise, and when he had enough to make a book he self-published The Party in a very small edition under the ‘Paragraphic’ imprint, mostly for his similarly critically-minded friends. Each of the drawings was matched with a barbed witty caption – ‘Miss Millie Follicle, heiress to the Spanflex fortune’, and ‘Mr Roy Fumblethumb entertaining Mrs Joyce Rampage’. Sexual innuendo is rife, and as the night progresses various body parts start slipping from the revellers’ elegant attire.

Ungerer’s angry satirical take on a Hamptons party, attended by captains of industry, tycoons, magnates and other fat cats luxuriating in their tuxedos, evening gowns and small talk, quickly became an underground success, and his Swiss publisher Diogenes produced a boxed trade edition (in English) in 1969, with a new cheap edition in 1973.

Tellingly, it was not republished in the USA for more than half a century, but the good news is that a new edition of The Party was published in 2020 by Seattle-based comics publisher Fantagraphic Books, together with all the original drawings and text, and a new introduction by Dwayne Booth under the pseudonym Mr Fish. The link to buy the book directly from Fantagraphic is here.