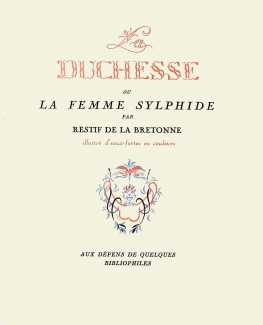 La duchesse, ou la femme sylphide (The Duchess, or The Sylph-like Woman) comes from the overly-prolific pen of Nicolas-Edme Réstif (1734–1806), better known as Restif de la Bretonne and the author of the massive sixteen-volume autobiography Monsieur Nicolas, in which at the age of sixty he set down the details of his numerous loves and lovers, both real and imagined. La Femme-Sylphide or Femme-Sylfide is a short story from his Contemporaines, published in 1783. The first separate edition of the text dates was only published for the first time in Paris in 1946.

Réstif was born at Sacy near Reims in north-east France and was educated by the Jansenists at Bicêtre, but was involved in a sexual scandal and apprenticed as a printer at Auxerre. In 1760 he married Agnès Lebègue, a relative of his Auxerre teacher. Within a few years he was writing and printing his own books on a wide variety of subjects, and by his death he had produced some two hundred volumes, many of them printed by his own hand. He was a highly original thinker and a confirmed rebel, with fascinating ideas on a range of subjects from prostitution reform to communal living; he is thought to have been the first writer to use the word ‘communist’ in its modern meaning. He is particularly vivid in his descriptions of his early sexual awakening, women’s clothes and particularly their shoes being especially powerful, such that he is often cited as the first recorded shoe fetishist.

A sample from the text of Femme sylphide: ‘A woman must look like a sylph – a flat shoe makes her look too common and earthy, while a high heel keeps her from touching the earth, making her a kind of celestial creature. Duchesses alone maintain this privilege – they play sylphs, going to court expecting a certain look from the sovereign, and then returning to their palaces to play the same role.’

La duchesse was published ‘Aux dépens de quelques bibliophiles’ (at the expense of a few bibliophiles) in a limited numbered edition of 240 copies, or which just twenty included the set of sanguines with remarques shown here.