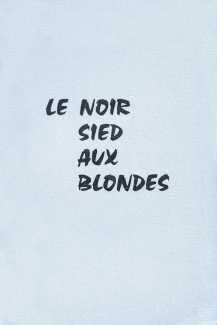 Le noir sied aux blondes (Black Suits Blondes) is a fascinating glimpse into the French sexual and political scene in the late 1950s. The text is by one ‘Lyneczy-Stan’, which appears nowhere other than in connection with this book, but for the genre is well-told and intelligent, often using Paris street slang to colour the dialogue.

Two Guineans have opened a bar, the Mambo, in the down-at-heel Paris district of Barbès-Rochechouart, where ‘all the cuties of Paris come in search of dark-skinned men to play with’. The two ‘Norafs’ who run Mambo persuade some of the girls to join the local prostitutes, run by ‘a gang of Arab pimps’ connected with the Algerian FLN (Front de Libération Nationale), who are in the process of taking the business over from the previous ‘Corsican scum’. The moral is that novelty can be liberating if you’re a young woman prepared to expand your sexual experience, but it’s not always a good idea to hang out with known thugs.

Altogether a very mysterious production, with no publisher's name or place of publication given.