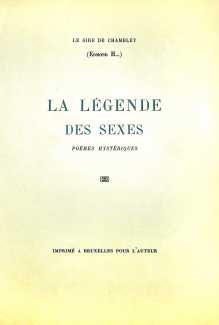 La légende des sexes, poèmes hystériques (Legend of the Sexes: Hysterical Poems) was French poet Edmond Haraucourt’s first published work, appearing in 1882 when he was 26 years old under the pseudonym Le Sire de Chambley. Like Baudelaire’s Les fleurs du mal, the subject matter which includes violent love and sexual allusion might seem rather tame today, but at the time it was subject to both censure and censorship.

This 1923 clandestine edition of La légende des sexes is accompanied by a fascinating mixture of images. Most of the illustrations are by Sternberg, though the volume also includes a selection of illustrations from earlier editions, five (of the original twelve) by Martin van Maele from the Carrington edition of 1908, a frontispiece by Félicien Rops from the 1921 edition, and six previously unpublished engravings by Franz von Bayros. Unlike most copies of this rare edition, the fifteen Sternberg illustrations are hand-coloured, presumably by the artist, creating a wonderful set of images for Haraucourt’s pioneering text.

This edition of La légende des sexes was published in Brussels ‘for the author’ in a limited numbered edition of 380 copies.