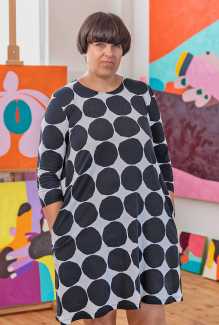 Depicting close crops of the naked human body, these paintings draw from Helen Beard’s fifteen-year career in the film industry and her studies of ways of framing the shots to imbue an image with tension and sense of narrative. Through an expressive painterly language, she creates a dialogue with women’s desire and viewpoint, but also brings up important ideas about body positivity.

By depicting same-sex scenes, Beard includes the LGBTQ+ community, misrepresented, marginalised and fetishised by the predominantly heterosexual male gaze. Her artworks are revolutionary in the sense that they empower everyone to accept their bodies, embrace their sexuality, and enjoy pleasure just as men have been doing since the dawn of time.