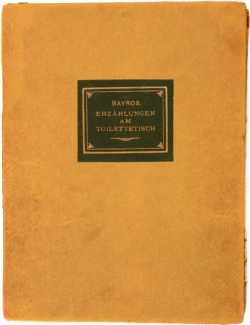 By 1911 every discerning ‘connoisseur’ collector in Europe knew the work of ‘Choisy le Conin’, so when Erzählungen am Toilettentisch (Tales from Dressing Tables) appeared it was eagerly anticipated, and the small privately-printed edition sold very quickly.

For reasons we cannot now know, while the title page gave the illustrator’s identity as Choisy, the front cover of the portfolio is printed with ‘Bayros’, so the Munich authorities had no doubt about its authorship, and quickly started censorship proceedings against Bayros. As it was such a limited privately printed edition, and was mostly sold through Paris dealers, the action quickly fizzled out, but not before Franz had left Munich for several months so as not to be apprehended.

The 1911 edition of Erzählungen am Toilettentische was published in an edition of just 300 copies, though the drawings have frequently been reproduced in modern facsimile editions.