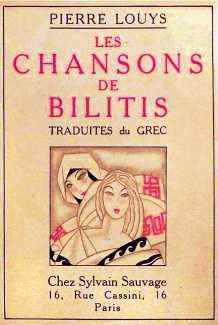 Sauvage was the second of the many artists to produce illustrations for Bilitis, following the sumptuous George Barbier edition of five years earlier, which Sauvage no doubt knew and admired; you can see the Barbier illustrations here. Like Barbier’s, Sauvage’s plates are pure Art Deco, the movement which took its name from the Exposition Internationale des Arts Décoratifs et Industriels Modernes (International Exhibition of Modern Decorative and Industrial Arts) held in Paris in 1925, and with which Sauvage immediately identified.

The Sauvage illustrations are almost naive in their simplicity, using colour sparingly in carefully-framed compositions.