The original Tannhäuser, long before Wagner made him internationally famous by naming an opera after him, already had quite a tale to tell. Tradition has it that this thirteenth century Geman knight and poet was descended from the Lords of Thannhausen, with their castle at Tannhausen near Ellwangen. More likely, however, he was part of the Tanhusen family of imperial administrators, with their residence in the area of Neumarkt in the Bavarian Nordgau.

The story runs that Tannhäuser dicovered the Venusberg, the subterranean home of Venus, and spent a year there worshipping the goddess. After leaving the Venusberg, he was filled with remorse and travelled to Rome to ask Pope Urban IV to be absolved of his sins. Urban replied that forgiveness was impossible, as impossible as it would be for his papal staff to blossom. Mysteriously, three days after Tannhäuser’s departure Urban’s staff bloomed with flowers. Messengers were sent after the knight, but he had already returned to Venusberg, never to be seen again. 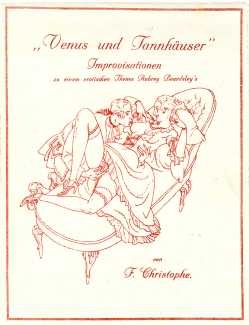 In Christophe’s wonderfully inventive imagination, Tannhäuser meets Venus (and all her friends) in the eighteenth century – and as the subtitle suggests, they improvise profusely and energetically. Christophe specifically acknowledges Aubrey Beardsley as his muse and inspiration, and this series of engravings in Christophe’s trademark linear treatment marks some of his best work.

This portfolio is extremely rare, only nine complete copies having been produced.